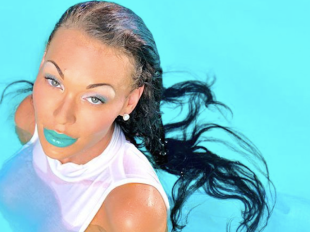 Mia Isabella showed no mercy this week on Instagram, sharing screen shots of an alleged conversation with Tyga, 25. “Seven months I stayed suffering and depressed protecting you while losing everything,” she wrote alongside the photos. “I’m not taking any more L’s for you f**k you.”

Rumors first swirled last year when Tyga was accused of having a supposed tryst with the transsexual babe. The rapper later brushed off the rumors, denying any relationship, but Isabella still maintains her claims of a hookup (clearly).

“Your bisexuality for women and Trans women is highly common in heterosexual men,” the model went on, calling out Tyga’s sexual preferences. “Own your sh*t so nobody can ever use it against you again. But I’m not hiding anything anymore & not carrying your shame its too heavy for me so HERE you can have it back now. I don’t have to hide I’ve never lived in the closet that’s your burden to carry. ”

“Your lucky I don’t sue your ass for everything you put me through but I won’t because you don’t have anything that I want all I want is my dignity so I’m taking it back,” Mia Isabella concluded her post with a bang. “Happy 3.5 year anniversary an early Valentines gift for you ❤ @kinggoldchains.” Meanwhile, Tyga and Kylie seem to be going on strong, though even Kylie’s sister Khloe said in a recent interview that she can’t keep track of when they’re dating and when they’ve gone on a break. IT DOESN’T END THERE… Mia says she and San Francisco 49ers quarterback Colin Kaepernick were once in a romantic relationship. Isabella originally remained quiet about her love for Kaepernick to “protect” him. “I loved him very much and he cared for me greatly, but in order to protect his brand I made him walk away from me,” she told International Business Times via email Monday. “Knowing the persecution he would face because I’m a Trans woman.” They have not spoken since late September, she added.

Isabella, 30, first spoke about the past relationship Saturday. “If I’m honest I have not been very good to my own heart. I’ve burdened her with heavy truths too great for it to bear. Today I tell the truth,” she tweeted. “During the @Tyga scandal someone outed my connection w @Kaepernick7 to discriminate against and persecute us because I’m a Trans woman.

“There is nothing wrong with loving a Trans woman,” Isabella continued. “It was my heart and soul he loved it wasn’t because of my sexuality. I have to thank @MichaelSamNFL my publicist @misslainie and my grandmother for holding the truths I told them. It hurt me to lose our bond,” she said about Kaepernick, 28.

Isabella finished: “The persecution of Trans women and Trans attracted men is REAL! But I thank him for being there for me when I almost gave up he saved my life.”