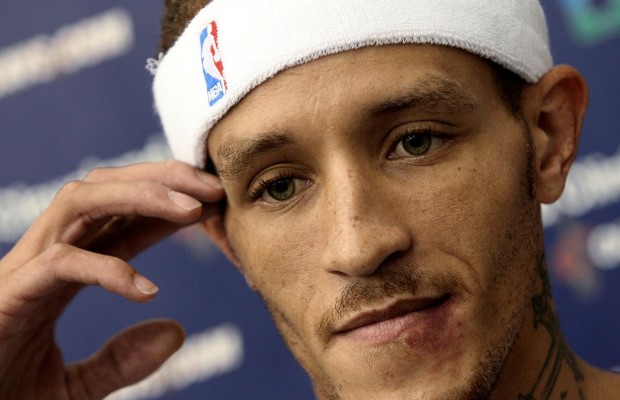 Troubled former NBA player Delonte West was spotted wandering the streets of Houston wearing a hospital gown and no shoes.

Delonte West, a 32-year-old eight-year NBA veteran who left the league in 2012, was in a Jack In The Box parking lot when a fan approached him earlier this week.

According to the fan who uploaded photos of the run-in on Instagram, West, who earned more than $16 million playing ball with Boston, Seattle, Cleveland and Dallas, had bizarre words to share.

When the fan asked ‘Are you Delonte West?’ the 2004 first-round draft pick said, ‘I used to be, but I’m not about that life anymore’, according to TMZ.

The fan uploaded two pictures of West to Instagram, where the former NBA star is wearing a flannel shirt, covered by a hospital gown, covered by a vest.

In one photo – where he poses with the fan – West has his eyes shut. ‘Another pic of ex nba player #delontewest bro had hospital robe on like he escaped from the psych ward or some s***,’ the fan said in his photo caption. ‘I asked wat happened and he said life…….d***!’

The former St Joseph’s star was diagnosed with bipolar disorder in 2008.

West, who finished his time with the NBA with 4,000 career points, has a long history of off-court controversies, including an arrest and rumors that he had sex with Cleveland Cavaliers star LeBron James’s mother.

He has denied the 2010 rumor about James’s mom for years, and said he didn’t want his son to be a junior because he didn’t want other kids asking him about the incident. ‘I don’t want my son going to school and people making fun of him for something his daddy did,’ he told Vice Sports in 2014.

Back in 2009, West was arrested in Maryland while driving his three-wheeled Can-Am Spyder motorcycle after he cut off a police car. Officers who searched him discovered a Remington 870 shotgun inside a guitar case strapped to his back, as well as a 9mm Beretta handgun and a .357 Magnum in his pockets.

Officers also found an eight-and-a-half inch Bowie knife. West was sentenced in July 2010 to the weapons and speeding charges and was ordered to do 40 hours of community service and serve two years of unsupervised probation.

He also had to undergo counseling and be electronically monitored for eight months.

In 2011 the guard revealed that he applied for a job at Home Depot during the NBA lockout, according to the New York Post. ‘It’s official,’ he wrote in a since-deleted tweet. ‘Pride 2 the side. just filled out application at Home Depot. Lockout aint a game.’

After leaving the league in 2012, West had stints with the NBA D-League and in China. He was waived by the Texas legends in early 2015.