SAN FRANCISCO — Facebook has taken to the skies with ambitious plans for a fleet of unmanned solar-powered aircraft that beam the Internet to the four billion or so people who don’t have it. Now it’s focused on terra firma.

The company, which runs the world’s most popular social network and among the most popular messaging services, said it has built two new ground-based technologies that aim to deliver the Internet to people who live in cities where networks are routinely jammed or who live far away from cell towers and fiber optic lines, using methods that cost less.

The challenge is huge. More than half the world is not online,” Facebook’s chief technology officer Michael Schroepfer told USA TODAY.

Facebook’s connectivity plans try to bring the Internet where it’s not available and where it is available, “making it radically cheaper,” he said, “so that more people can use and use more of it.”

It’s all part of Facebook’s grand plan to connect every person on the planet. According to Facebook, fewer than half of the world’s population are online, and 1.6 billion people don’t live within range of a data network.

Terragraph is designed to bring high-speed Internet to dense urban areas. It’s currently being tested at Facebook headquarters in Menlo Park, Calif., with plans for a bigger trial in San Jose. Rather than laying fiber optic lines, Terragraph places small nodes or boxes on lamp posts, buildings, bus stops and other “street furniture” up to 820 feet apart to stretch the 60 gigahertz signal to offer high-speed Internet.

Terragraph places small nodes or boxes on lamp posts, buildings, bus stops and the like at distances up to 820 feet apart to bring high-speed Internet to dense urban areas.

Project ARIES is in its early stages. Its goal is to extend Internet access to rural communities by using the existing wireless spectrum more efficiently. Facebook says in 20 countries it studied, more than 90% of people live 25 miles from a major city. It plans to make the technology available to wireless communications researchers.

Facebook hopes to speed development of new technologies by making much of its own research available at no cost. The arrangement is inspired by the open-source software movement, in which anyone can have access the computer code but must share advances with the community at large. 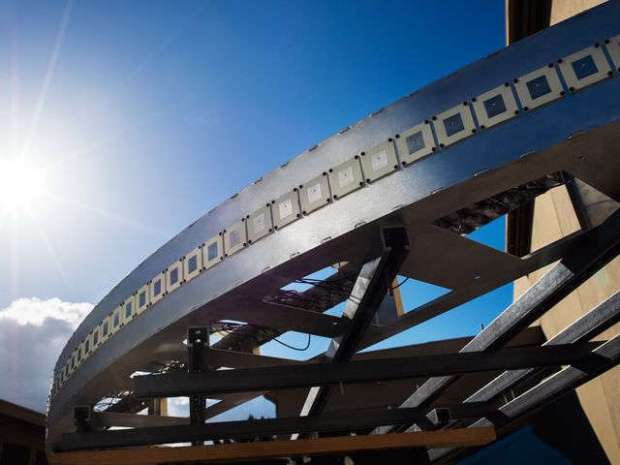 “We take our mission to connect everyone seriously,” Jay Parikh, Facebook’s vice president of engineering, said on stage at the f8 conference.. “However, this is a really hard problem.”

The two latest initiatives work alongside a program to bring Internet to unconnected areas via solar-powered drones. These unmanned planes, dubbed Aquila (Latin for “eagle”), are the size of a Boeing 737 that fly miles above the Earth, providing broadband-level Internet for people in a 50-mile radius below.

Facebook is not alone in its quest to discover new technologies to deliver Internet access to billions of people in developing countries.